On February 27 in 1869, The Pilot, an Irish-American newspaper, printed a disturbing letter from a Catholic priest that led me to do a bit of true crime investigation.
The priest was writing on behalf of a girl named Margaret Nolan, 19. Ten or eleven years prior, she had been kidnapped while playing in the street, taken by police in New York City. She was brought to someone named “Rev” Townsend, who took her and many others to a place referred to in the letter as “the ‘Refuge’ on Randall’s Island”. Apparently Townsend was notorious for this kind of “transaction”. Now living in Iowa, Margaret wanted to hear from her family. Her eyesight and hearing had suffered badly due to the stress she endured, which was part of the reason a priest was writing for her.
The place Margaret is referring to was called the New York House of Refuge, the first ever juvenile reformatory in America. Inmates were committed for either vagrancy or petty crime. But Margaret wasn’t homeless, so what happened? 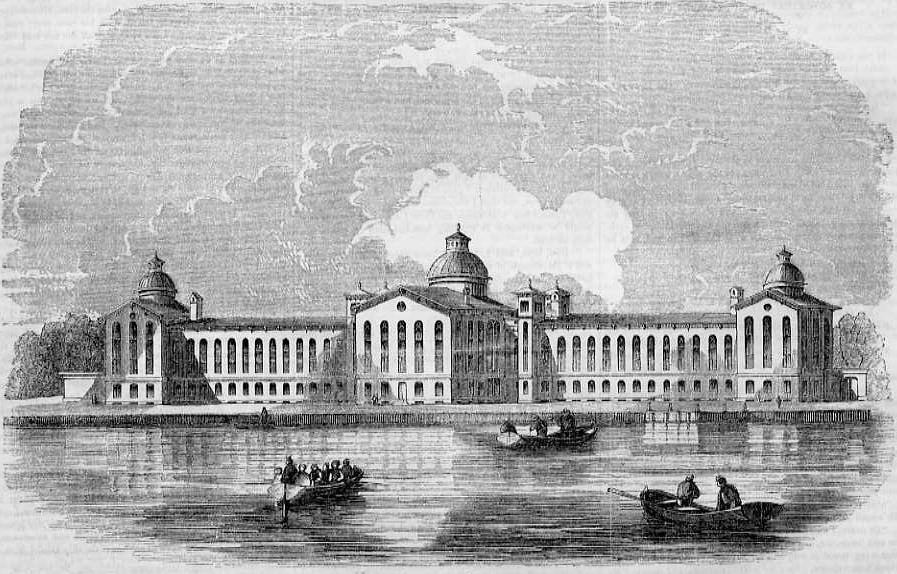 I was able to trace Rev. Townsend to Iowa City in 1860, about a year after Margaret was kidnapped, and found that he was in contact with the superintendent of Randall’s Island, i.e. the Refuge. It was reported on January 25, 1860 that “the children in the House of Industry there, most of whom came from the Island, are doing well.”
The “House of Industry” was most likely a place of child labor. In the 1800s, it wasn’t uncommon for orphan children to be taken into corrupt almshouses, for example, and rented out to make money for the organization. Look at The New York Times reference in the comments and you’ll see this matches exactly. The Refuge “had the authority to “bind out inmates through indenture agreements by which employers agreed to supervise them during their employment.” Most likely, this is what happened to Margaret, only she wasn’t an orphan. She was kidnapped.
My theory is that Townsend had children kidnapped and sent to the Refuge to later be sent on to his House of Industry to make a profit off child labor. If you think this isn’t possible, look up the Dozier School for Boys.

Book Review: Broken Faith: Inside the Word of Faith Fellowship, One of America’s Most Dangerous Cults by Mitch Weiss

Review: We Are the Kings by Ariane Torres

We are the Kings by Ariane Torres My rating: 3 of 5 stars At times incredibly insightful and deep while at others overly detailed in irrelevance, We Are the Kings looks at life through the lens of someone who has just lost their grandmother, a woman whose life it turns out she only partially knew. […]

Why Did the Victorians Think It Was Dangerous for Women to Read Novels and Newspapers?

This late 19th century image is meant to be satirical, a role reversal of men and women of the time. The woman is “wearing the pants” (not literally, that was still off limits), wearing a masculine hat, and worst of all, reading a newspaper. ::shock horror!:: In Victorian times, it was thought that women shouldn’t […]

How the Irish and Irish-Americans Celebrated St. Patrick’s Day in the 1850s

St. Patrick’s Day has become synonymous with drinking in modern days, but do you know what kinds of celebrations they had in the 1850s? The Pilot, an Irish-American newspaper in Boston, dedicated the whole of page 2 of their April 10, 1858 issue to the many celebrations in different areas of the States and world. […]

Family Money by Chad ZunkerMy rating: 3 of 5 stars This suspense book lacked real suspense a lot of the time. The overwhelming source of tension throughout most of it was whether Alex’s wife would find out he’s lying to her since that’s something she can’t abide. That’s not enough for a suspense/thriller book. That’s […]

Book Review: Broken Faith: Inside the Word of Faith Fellowship, One of America’s Most Dangerous Cults by Mitch Weiss

Review: We Are the Kings by Ariane Torres

Why Did the Victorians Think It Was Dangerous for Women to Read Novels and Newspapers?