I love studying the way different authors, filmmakers, and artists represent various kinds of characters, so why not share my conclusions with you? Sharing makes these things much more fun.
Let’s start with psychopaths. There are so many to choose from, but I have two particular ones in mind, and they’re not from books. My two favorite but opposite psychopaths are from films: Richard Widmark in Kiss of Death (1947) and Johnny Depp in Black Mass (2015). You’d never normally relate these two characters, but while they have major differences in their superficial characteristics, they are extremely similar in the core of what makes them psychopaths.
How they’re different:

But the most fascinating thing of all is how these actors portray their psychopathic characters. Because the characters’ cores are the same, they are drawing from the same place within themselves to outwardly exhibit their mental state. Just look at these pictures and how similar they are, even with the characters’ superficial differences listed above. 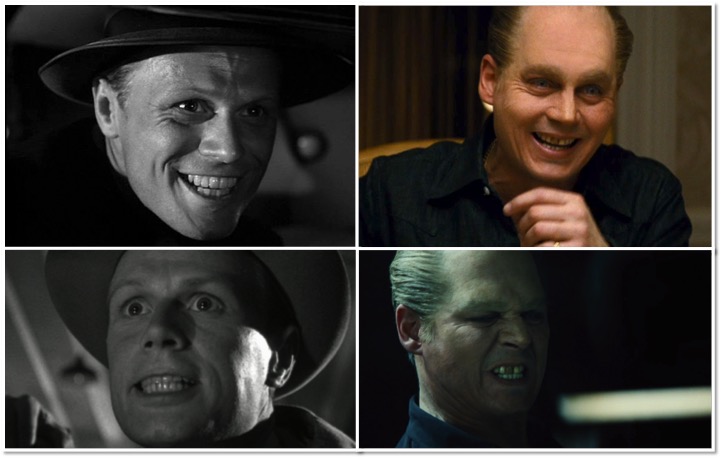 What does this say? That psychopaths can have their own individual ways of handling things outwardly, but their inner cores are duplications of each other. You can creatively toy with their methods and the cause of their madness, but there’s only so much deviation you can believably make to their psychology. This may sound limiting, but it’s actually really great because it allows for unique characters at the same time that you already know what they’re made of inside. So their baseline creates certain expectations that are always fulfilled. As you can see from the time periods of these movies (and real psychopaths throughout history), the basic psychology has always been the same, something dependable, although that’s a strange word to use to describe it!
Who are your favorite psychopath characters, whether from fiction or fact? Film or book?