How to Ruin an Ending in One Easy Move

The Strange Affair of Uncle Harry (1945) was a fantastic movie. Heartbreaking, suspenseful, psychological. Yes, one hour and 15 minutes of it was great. The last 5 minutes, however, were horrendous. You see, this movie suffered from Cop-out Ending Disorder, and it ruined the entire thing.
Spoilers are included in this post, but don’t worry. If you watch the movie, you’ll be so confused by the ending that only the final screen’s warning will hint at what actually happened. “In order that your friends may enjoy this picture, please do not disclose the ending.” That was the only thing that told me the filmmakers hadn’t gone crazy. I had to really think about what on earth I just watched and only then did I finally understand. That’s when I got really annoyed.
Imagine you spend time writing a deep, sometimes slightly disturbing psychological suspense movie script. You write it all the way to the end and you have two choices: (1) satisfy moviegoers with something that fits the rest of the movie or (2) show that none of the intensity that led to the ending ever happened. That’s right, 30 minutes worth of movie were for naught. And somehow, for some unfortunate reason, Universal Pictures decided that #2 was the ending for them.
Even while you’re watching the bad ending, you think you know where it’s going. You think the main character has gone insane and it’ll end on a fittingly disconcerting note, slightly creepy and still within the movie code (in this time period, movies had to adhere to a movie code where everyone gets their just desserts, essentially). But no. It turns out none of the most satisfyingly dark stuff ever happened and everything is okay and everyone lives happily ever after. In other words, they’ve chosen the dream trope. Oh, thank goodness it was only my imagination!
I don’t know about you, but the disappointment in this kind of cop-out forces me to hate the movie as a whole and want to rewrite it with the much better ending it should been given the dignity to have. If you, reader of my blog, are a writer, please don’t do this to me or to your book. It’s not fair to your readers, your characters, or your writing in general. Do something with your ending that will satisfy and, if possible, surprise. It’s 100% worth the effort to come up with something that is, at the very least, appropriate to the rest of the story. If readers remember your book based on the last thing they read, your ending had better make the whole experience worth it.
That’s my editorial rant for the day. 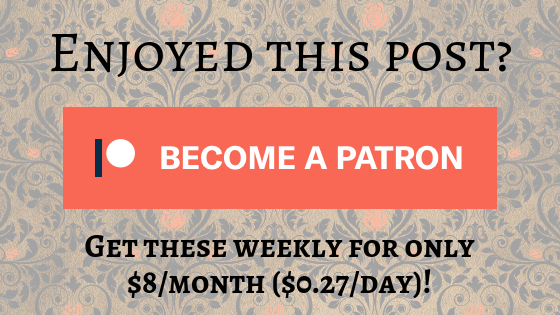 When Monday is a national holiday, it gets a pass. One of the most important things creativity can be used for is not necessarily pushing your own views, but zooming in on something that needs more attention. In Joe Compton’s Amongst the Killing, it was how multidimensional the pain of loss can be and that it […]

Forgive the lack of Monday Thoughts on Creativity, but BIG NEWS! If you missed the Women in Publishing/Strong Leadership live discussion panel on April 10, you can watch the recorded video here: We had great questions from Twitter, varied opinions and ideas, and overall a fantastic panel of successful women in the publishing industry. This […]

Be gentle, Monday. It’s all a bit sudden. Have you ever read a line in a book or a poem that blew your mind with its simplicity? Sometimes a writer can break a concept down so far that you’re wowed and amazed that it never occurred to you to phrase or express it that way. […]

Hello Monday. You’re unexpected. Sometimes when I’m overly stressed, I can’t concentrate on creativity easily. It’s not a flowing process, so I need to cleanse my brain’s palette. There are two ways that I do this: I make lists of everything I need to do. One of the things I constantly stress about is forgetting […]

Mondays are very sneaky, aren’t they? Just as you get used to living in the weekend, BAM, Monday wakes you up at 6 a.m. YES. One way I personally interpret this – and I feel there are many ways to read it – is that editing is also creativity. In order for me to write and not […]

Rare Half-Price Sale on My Novels!

Live Reading of The Artist Tonight at 7pm ET!