Shadow of a Doubt…About Loose Ends

Alfred Hitchcock is a master of suspense as well as a wonderful director; that part of the 1943 movie Shadow of a Doubt isn’t in question. But an unfortunate loose end is. Hitchcock didn’t write this screenplay, so we can put him aside as having committed no crime. Whew!
Actually, this movie was very good, and if you get the chance to see it, it’s worth a watch. Classic suspense. I have only one complaint: an unfortunate loose end.
We’ve got a situation in which Charlotte, nicknamed Charlie after her Uncle Charlie, is deathly bored at home. 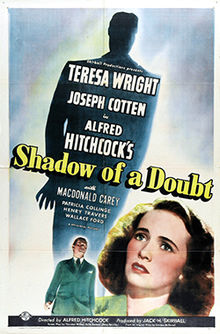 So of course when Uncle Charlie comes to visit, she’s all excited. He’s that interesting, well-traveled, generous type of uncle who likes to spoil his nieces and nephews. But Uncle Charlie starts acting very oddly, and unfortunately for Charlie, she catches on to his strange behavior a little too quickly, even pointing it out to him and guessing at what secret he might be hiding.
At some point during the movie, as suspicions rise about Uncle Charlie’s possible link to major crimes (no spoilers here!), deadly things start to happen to Charlie. By this time, Charlie is sure she knows the truth about her uncle. So when a stair breaks as she’s going down it, and then the family car is left running in a closed garage with no key in the ignition and she gets trapped inside, it all seems a bit coincidental with Uncle Charlie’s behavior and attitude.
Here’s where the loose end jumps in. Charlie’s mother—and Uncle Charlie’s sister, Emma—pauses after the car incident and realizes that Charlie’s “accidents” aren’t a coincidence and could’ve killed her. This is a super important moment since she has recognized a pattern: “I just don’t understand it. First the stairs, and then the…” The car drives away while she’s still contemplating.
Well, Emma’s realization gets completely dropped and never picked up again. Why bother having her recognize these non-coincidences unless she’s going to do something about them or draw a conclusion that affects the story? There are two ways this could have been fixed:

I have a new endeavor! Just a mini endeavor, but I’m now doing micro-reviews of black and white films on my Pinterest page. Each pin includes the name of the film, year, main cast (usually two to three people), a “star” rating, and the reasons I liked and disliked it – all in something that will […]