Corrupted Magic is the second book in the Grimoire Society of Dark Acts series. Episode 25 is up on my Patreon—it’s pay-what-you-like—and it’ll go up three days later on Kindle Vella. Here’s an excerpt from this latest episode.

It can’t go without a hitch when Dark Acts is about to leave to rescue Gertrude.

What Corrupted Magic is about:

Grimoire Society of Dark Acts’s hard-won defeat of the brutal Harpe brothers should have been a relief… But through a forced double blood-binding, Gertrude disappears right in front of their eyes. The Ruin Rats, a vicious magical street gang, is out for Dark Acts’s blood. Knox calls on the deadly gang from his past for help, but is the physical cost too high to pay? As if that’s not enough, a new corrupt form of magic is throwing the entire magical universe off balance. 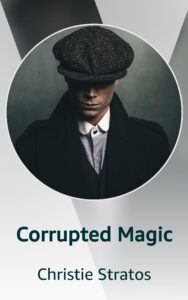 The loud clanging of a bell startled Humphrey awake.

The old lantern clock struck 3:15 a.m. outside his room, loud enough to be heard at least throughout the third floor if not below it. Humphrey had a hard time prying his heavy eyelids open.

The previous night had been quite an entertaining show. Apparently Grimoires didn’t execute things like cooking or house cleaning. They were only to be used for more serious things.

So Carmichael had run around the kitchen using potions to create an absolute mess. The proof was in the pudding, so to speak—he definitely hadn’t worked with potions in quite some time. And the pudding, as irony would have it, had ended up all over the walls. And him.

In the end, they’d had to settle for very simple fare, none of which was quite right, but it tasted good enough despite the mushy consistency, even for the meat. After so much had happened recently, it was a relief simply to sit around the dining room table and laugh together. Especially at Carmichael.

Humphrey pushed himself up, his entire body resisting. What a terrible hour to have to wake up.

But then their purpose jolted through him. Grimoire Assassins. I have to be awake enough to defend myself.

It was starting to feel comfortable calling his society and their colleagues “friends”. It was all starting to normalize rather quickly.

Humphrey threw his feet over the side of the bed, yawning, and got up to put on his suit. There should be rules of combat. No suit jackets allowed.

Last night, Carmichael had made grand promises of coffee this morning. Hopefully whatever concoction he managed would be close enough to wake them all up.

After dressing by only the fading moonlight shining through his window behind his bed, Humphrey ran a comb through his graying hair, then picked up his crystal ball from its gold stand on his night table. He pushed his hand through the jelly center and up onto his wrist.

Humphrey opened his bedroom door to find Knox already clomping down the stairs, perhaps to the weapons room. Finnegan popped his head out of his bedroom.

“How’s this hour for you, old man?” He smiled, his eyes looking tired, as all of theirs probably would.

“Terrible,” Humphrey said. “I never want to see it again as long as I live.”

“It’s a long road that has no turning. Still, I’d be happy with that.”

Someday Humphrey was going to buy a book of Irish proverbs and surprise Finnegan with one.

They headed downstairs together, and both had the same idea: coffee.

In the basement dining room, Humphrey was pleasantly surprised to find a table full of white porcelain cups and saucers with floral and gold embellishments, all filled with coffee. It was far more than any of them could drink…and the saucers under the cups were also filled with coffee. Hopefully the taste would be better than the appearance.

Bustling in from the kitchen, Carmichael held a silver serving tray full of scrambled eggs one-third the size of normal ones on individual too-big plates. At least their consistency looked normal.

“These should taste good, even if they are a little unsightly,” he said, looking around for where to put the tray since the whole table was full of coffee. “I’m starting to get used to this potion cooking. I have renewed respect for Gertrude’s brilliance.” He placed the tray on the server behind him. “I suppose she’s right. Potion making does require concentration, and a lot of it.”

Enjoyed this excerpt? Please join my Patreon to continue the story—it’s pay-what-you-like, and Patreon gets all episodes first before any other platform, plus exclusive details no one else will ever know about!

You can also head over to Amazon to read and like this episode. While you’re there, hit +Follow on Corrupted Magic so you’re always notified when there’s a new episode: https://www.amazon.com/dp/B0B7GGRRQ7/ 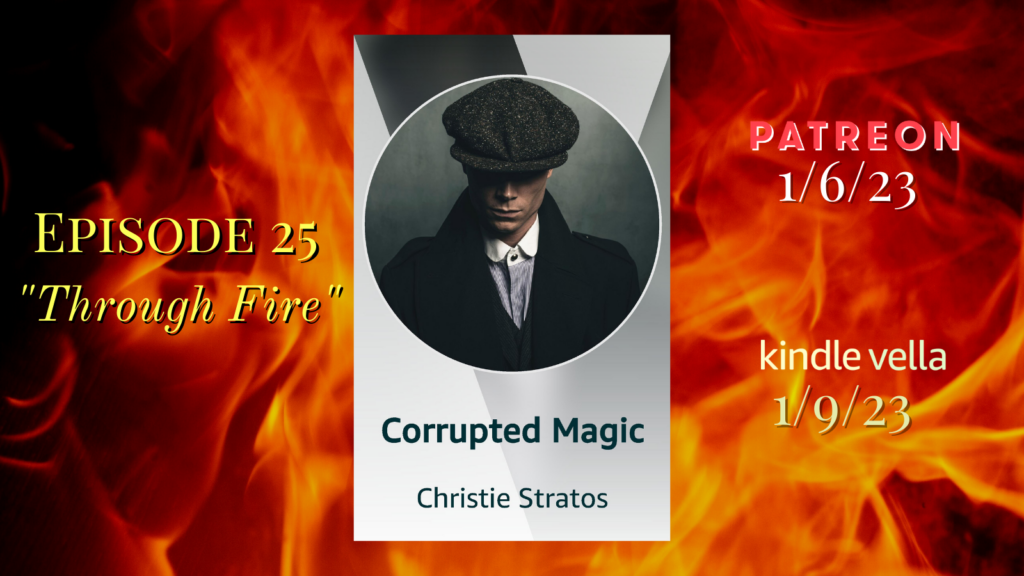 Corrupted Magic is the second book in the Grimoire Society of Dark Acts series. Episode 28 is up on my Patreon—it’s pay-what-you-like—and it’ll go up three days later on Kindle Vella. Here’s an excerpt from this latest episode. Grimoire Assassins’ house starts out surprising, and the danger only increases from there. What Corrupted Magic is about: Grimoire […]

Corrupted Magic is the second book in the Grimoire Society of Dark Acts series. Episode 26 is up on my Patreon—it’s pay-what-you-like—and it’ll go up three days later on Kindle Vella. Here’s an excerpt from this latest episode. Knox’s men contribute to the new direction the society will take to save Gertrude…but will it end […]

Corrupted Magic is the second book in the Grimoire Society of Dark Acts series. Episode 24 is up on my Patreon—it’s pay-what-you-like—and it’ll go up three days later on Kindle Vella. Here’s an excerpt from this latest episode. Finnegan relives the same day—will anything change, or will Knox’s sacrifice be in vain? What Corrupted Magic is about: […]

Corrupted Magic is the second book in the Grimoire Society of Dark Acts series. Episode 23 is up on my Patreon—it’s pay-what-you-like—and it’ll go up three days later on Kindle Vella. Here’s an excerpt from this latest episode. Knox faces an incredibly difficult decision with no guarantee of how it will turn out: steal someone […]

Corrupted Magic is the second book in the Grimoire Society of Dark Acts series. Episode 22 is up on my Patreon—it’s pay-what-you-like—and it’ll go up three days later on Kindle Vella. Here’s an excerpt from this latest episode. The remaining members of Dark Acts and two additional magicals try to get into Grimoire Assassins’ house, […]

Corrupted Magic, Episode 21: A Life for a Life