Why #IndiePrideDay Was (And Is) So Important

There’s no question about it – Indie Pride Day was a major success, way beyond what I expected. TONS of indie authors participated and, as usual, everyone was extremely kind and ready to cross-promote. I can’t tell you how happy I am to be able to call that sort of behavior “the usual” in any group of people.
In case you weren’t there, the idea was to take a picture of yourself with your book and post it on Twitter and Facebook so that we could all take pride in our work and the fact that we chose to independently publish, and also to put indies on the “trending” map on social media. This further enables those participating to spread the word about their own and fellow indie authors’ works in a way that isn’t advertising. I thought this was a brilliant idea. It was the second annual event, and I’m already looking forward to next year’s! 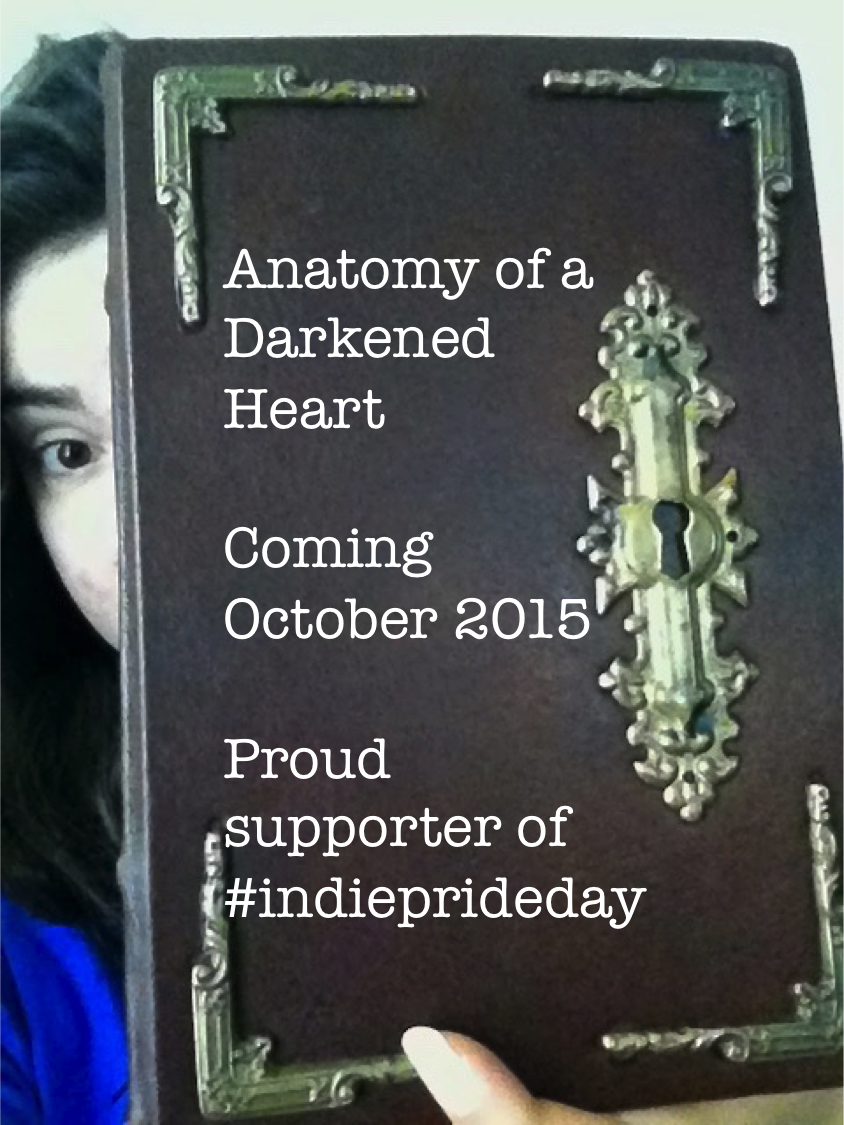 One of the things I thought was so nice was that I could participate without having published my book yet. Anatomy of a Darkened Heart (AoDH) comes out in October 2015, yet Mark Shaw (creator of the #IndieBooksBeSeen movement) went out of his way to tell me I could still post my picture with the name of my book, just so I could participate along with everyone else. In what other community besides the indie author community can you find people who make exceptions to the rules for you and go out of their way to gather participants when they’ve already got loads? Between the Get Down With The Awethors Facebook group and the IBBS peeps, I’m convinced indie authors are the most dedicated and friendly community around.
Indie Pride Day was not just important in terms of showing the world that indie authors aren’t stuck with self-publishing – we choose it willingly. It was important because our community was strengthened by a snowball effect with a hashtag that gathered writers and readers together. Don’t think that sounds like such a big deal? Many times author events end up gathering fellow authors, which is wonderful, but it’s tough to get readers involved. This event brought people who’d never heard of the group or the event itself into the mix, something that’s hard to accomplish. For that alone, I congratulate every single person who helped put the event together and every single person who participated, even just by retweeting one other person’s tweet. I was thrilled to see random people joining in and tweeting that the event sounded cool and that they were behind it, never mind how awesome it was when readers named their favorite indie authors and the new ones they’d now try. I got the chance to discover india authors I’d never heard of and follow them on Twitter and Facebook as well as promoting their books. It was fantastic to expand my network exponentially in just one day.
Let’s not consider this a one-day thing. Let’s consider this a clear and welcome sign that there are more of us out there than we could ever have dreamed – and we’re all waiting to support each other. We are really just one giant community, and there is room for every single author out there. Welcome. Please bring your friends.

Historical fiction author Margaret Pinard has taken the Mid-Year Book Freakout Tag and turned it into an authortube-style tag! Margaret, JC Carpenter, and I did this live, discussing our books, author goals, characters, writing tools, and more. We had a great time! Check out the panel’s books Post Views: 239

In this month’s Writers Showcase Podcast, I interviewed romance author VK Tritschler, who talked about writing multiple WIPs at the same time, the spice level of her latest upcoming paranormal romance series, what she does when characters make their own decisions, participating in NaNoWriMo, and lots more! VK Tritschler is a full-time busy body, and […]