Why Anatomy of a Darkened Heart Doesn't Have a Christmas Scene

Victorian Christmases are beautiful, full of tradition, and multi-faceted in celebration. In fact, many authors of both books and scripts would love to put a gorgeous Christmas scene into their book. So why isn’t there one in Anatomy of a Darkened Heart?
You’ll notice that I used the words “beautiful” and “gorgeous” to describe the way Victorian Christmases are 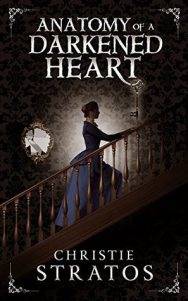 depicted, and that’s one reason why it wouldn’t fit into AoDH. A holiday with such deep religious meaning could work well, but it could also be very forced. AoDH focuses heavily on psychological tension and manipulation, and including a Christmas scene would be just as difficult as including a birthday scene – neither would make much sense because they are celebrations of life. They are essentially the opposite of AoDH’s theme.
I thought about Christmas and birthday scenes, rethought, tried to write one, hated it, and threw it out. It just didn’t suit the book as a whole. One of the most important things a writer can do is double and triple check that every scene in the book is necessary, and a holiday or birthday scene just wasn’t. It was awkward, stilted, and even though I wanted to put it in, the book rejected it.
What is an author to do when the book and the characters within it say, “NO!” When you’re dealing with characters like Elizabeth and Abigail, you listen.

THE ARTIST Is LIVE!

In this month’s Writers Showcase Podcast, I interviewed romance author VK Tritschler, who talked about writing multiple WIPs at the same time, the spice level of her latest upcoming paranormal romance series, what she does when characters make their own decisions, participating in NaNoWriMo, and lots more! VK Tritschler is a full-time busy body, and […]

Rare Half-Price Sale on My Novels!

If you subscribe to my newsletter, you already know that there’s a rare sale on my novels! Want to find out about sales before everyone else? Sign up here: bit.ly/christiestratosnewslettersignup For Smashwords’ Read an Ebook Week, both of my novels are 50% off. I only put my novels on sale once or twice a year […]

Good news! Yet another bookseller is carrying THE ARTIST, now on pre-order and releasing March 30, 2021! You can order it for $0.99 on Barnes & Noble. By the way, I’m currently reading the new historical suspense novel After Alice Fell by Kim Taylor Blakemore, and I’m updating daily along the way. I’m 5% in […]

The Dinner by Herman Koch My rating: 4 of 5 stars This is an unusual book that accomplished A LOT. I have to admit, when I was about 1/3 of the way into it, I started getting antsy. I stopped reading for a while, so my time between reading the first 1/3 or so and […]