SURPRISE! I wrote a Christmas short story in the world of the Grimoire Society of Dark Acts series! All your favorite characters, plenty of Victorian Christmas traditions, and loads of Christmas warmth and joy.

This story is exclusive to Patreon, so scroll down and read the excerpt, and then join my Patreon community (it’s pay what you wish, so you can join for just $1) to read the full story. It’s a good length and a lot of fun!

What “A Very Grimoire Christmas” is about:

It’s Humphrey’s first ever Christmas with Grimoire Society of Dark Acts, and the society is bringing their friends together on Christmas Eve while they decorate the house and the (enormous) tree. Carmichael has a special surprise planned this year, one that will wow the whole group, but Scrooge is being a Scrooge and won’t cooperate. What will the group get up to the night before Christmas?

*“A Very Grimoire Christmas” is a lighthearted, warm Christmas story with no action, only holiday cheer. Enjoy this excerpt!* 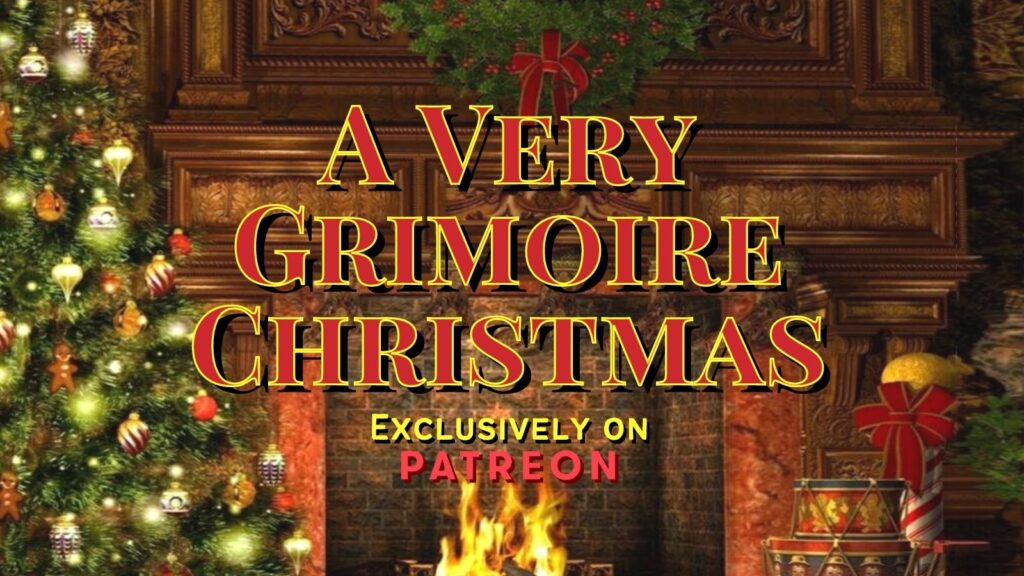 Carmichael walked into the second parlor room with two silver serving trays. The one atop his right hand balanced glasses of what looked like hot mulled wine and hot toddies. The silver serving tray on his left hand held delicious-looking slices of cottage Christmas pudding.

“I thought you couldn’t cook,” Humphrey said, pushing himself up from the blue and white carved mahogany sofa. He took a glass and a small plate of pudding, a fork already on it, then sat back down, placing the plate in his lap. “You were a cooking disaster when Gertrude wasn’t here.”

“Of course he was.” At the other end of the long sofa, Gertrude nodded hard. “I only wish I’d seen the mess he made around the kitchen.”

“Anne had to wash pudding out of his hair—”

“That’s enough!” Carmichael cried. “In answer to your question, Bollington, I cook only this pudding and make these two drinks for Christmas. And it’s a good thing I already made them, because I’m no longer in such a benevolent mood.” His wry smile betrayed him.

Carmichael offered his trays to Gertrude, who was stringing popcorn for the tree. The tree that wasn’t here yet.

“Bring the table over so I have somewhere to put it while I do this,” Gertrude insisted.

Humphrey made no move to help; he was too engrossed in the rich Christmassy tastes of suet blended with nutmeg, cloves, ginger, and sugar. The raisins and currants added wonderful interest to the texture.

“Well, put your trays down on the table and drag it over,” Gertrude instructed. “There’s no one else here to take your treats anyway. Are you just going to stand around with them? My goodness, I can’t imagine what you did before I joined this society.”

“All right, all right.” Carmichael did as she said, but the ornate wooden table they’d shoved into the corner was too heavy for him to drag alone. “Bollington, snap out of your pudding haze and come help.”

Humphrey obeyed begrudgingly, struggling up off the couch with both hands occupied and putting down his food and drink on the table. He helped Carmichael drag the table next to the sofa, closest to Gertrude.

“Leave the center of the room open so they can bring the tree in,” Gertrude said.

“Yes, Miss Oakley,” Carmichael said in the tone of an irritated child.

Sitting back down after another sip of mulled wine and leaving his treats on the table, Humphrey asked, “Should you have brought the hot drinks so soon? Knox and Finnegan aren’t back yet.”

“They probably stopped off for a drink somewhere,” Gertrude said. “You know those boys on Christmas Eve.” She looked at Humphrey. “Christmastime is the only time Finnegan drinks since coming to America.”

“Even so, they really should be back by now,” Carmichael said, flipping open his expensive-looking gold pocket watch as he stood in front of the fire across from the sofa. “They’ve been gone an hour. I can’t imagine why.” He walked closer to pick up a mulled wine, sipping it with smooth finesse.

Anne came up the stairs from the basement and entered the open room. “I’ve done it. Look how beautiful!” She held her creations forward with pride. It was something she’d read in the newspaper: pieces of cotton batting dipped in gum arabic and then rolled in diamond dust to create a sort of frosting for the tree, making it look like it was sprinkled with shining snow. “There’s more downstairs, almost dry.”

“That will look very nice, Anne,” Humphrey said. “I can imagine it now.”

Gertrude held out her hand for Anne to show her more closely. Anne came over and let Gertrude touch it. “Oh how lovely. You really got it to stick, too.”

Something hit the front door, startling them all. It sounded almost as if the door was being kicked.

After putting down his drink, Carmichael strode out of the room and answered the door. “What is that monstrosity!”

Enjoyed this excerpt? Please join my Patreon to continue the Patreon-exclusive story—it’s pay-what-you-like, plus exclusive author notes for it will publish on Patreon tomorrow!

A Victorian Christmas game, or burning yourself for Christmas fun

Do you relate Christmas to burning yourself over flames while trying to grab hold of fruits and nuts? No? If you were living in the 19th century, that’s part of what you’d look forward to during the holiday season. Let me explain. Snap-dragon is the game we’re talking about. To play, you turn down the […]

What scenes would I change from a novel and how would it change the story?

That question and a couple others are ones I’ve never been asked before, and they were all in my interview by Twitch writing sprint streamer and author David Payne! If you didn’t get to watch it live, you can watch it on YouTube or Twitch: Also, I know a lot of you enjoy the research […]

Read My Vellas FREE Through Oct 11!

Forgotten historical figures brought to life. Found family. Diversely aged characters with varied backgrounds. Flawed personalities. Unique magical realms and weapons. Secret magical societies. Victorian-era setting. Read for FREE through October 11 on your Kindle app or via Amazon on desktop! You can gobble up all my episodes in one day if you want. Binge […]

Android & Fire Users, GSDA Is Now Available To You!

You can now read Grimoire Society of Dark Acts on Android and Fire devices! Just go to the Kindle app, the Store tab, and tap the Kindle Vella link in the top menu, or you can search for my book title or my name. From Amazon’s email: BREAKING!Kindle Vella stories are now available to readers in […]

It’s NaNoWriMo month! That’s what November is, right? Nothing else important about this month? I’m working on the second book in my unpublished nanopunk books, but I’m also keeping up with Grimoire Society of Dark Acts, so both word counts are going toward my NaNo total count. On November 1, I wrote 2,383 words on […]